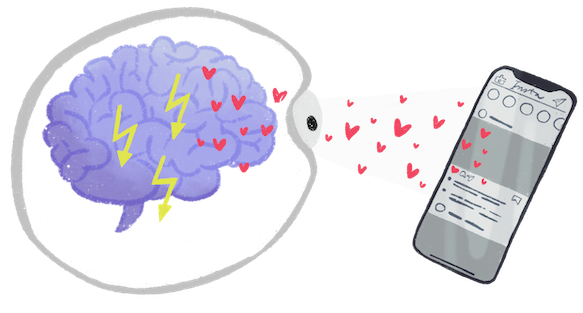 ADHD: How to effectively limit screen time to alleviate your symptoms

Many people who struggle with inattention and hyperactivity notice a link between their symptoms and the amount of time they spend in front of a screen. And accordingly, they’re looking for ways to limit their screen time.

In this post I collected effective ways to do so, plus explain what a Reddit user referred to when posting in an ADHD community: “I found the Holy Grail. My screen time dropped an average 44% last week.”

How does ADHD present itself and what’s problematic about it?

ADHD is short for Attention Deficit and Hyperactivity Disorder, which already points to its characteristics: The person concerned has troubles with holding attention and shows hyperactive behavior. Here are some some of the most typical symptoms of ADHD1:

One doesn’t need to be affected oneself to imagine why these symptoms can influence the patients’ lives vastly in a negative way. Being unable to concentrate and keeping still makes it very hard or even impossible to succeed in our highly structured performance society, where children are expected to stay quiet and concentrate for several hours a day at school, and adults need to fulfill their daily tasks to make a living. ADHD can affect performance at work or school dramatically.

Moreover, impulsive behavior and the impatient manner in communication which often comes with ADHD can strain relationships, and handling children with ADHD is also pretty challenging for the parents.

So what’s the (assumed) link between screen time and ADHD symptoms?

Research suggests that brains of people with ADHD show low levels of neurotransmitters. Those are called dopamine, serotonin, epinephrine or norepinephrine and are responsible for transferring information inside the brain. When they’re missing, stimuli can’t be properly filtered. The person gets easily distracted by new stimuli and finds it hard to stick to one thing.

Electronic devices with their action-packed visuals, quick motions, bright colors and sounds grab our attention and send a lot of dopamine to our brains. It’s not surprising that children with ADHD love screen time – it keeps them focused.

Let’s take a look at what has been actually investigated and found about the link between ADHD and screen time.

Firstly, what’s important to note is that screen time can be defined in very different ways. And so, studies about ADHD and screen time take different devices (smartphones, tablets, computers, TV and/or gaming devices) and activities (e.g. gaming, communication, surfing the internet) into account.

Many existing studies focus on the effects of TV screen time on children. The researchers make conflicting assumptions on the link between ADHD and screen time. For example, one study2 found that higher screen time at the age of 2 didn’t cause ADHD symptoms at the age of 4, while another one3 states that TV exposure at 1-3 increases the risk of attention problems at 7. Moreover, Canadian researchers4 detected a significant correlation between more ADHD symptoms and higher levels of screen time (when measured at the same time and not with a time gap in between).

Now let’s take a look at the effects of heavy smartphone resp. internet use. Here, research provides interesting results on different age groups: A study5 among elementary school students not only found that almost 15 % of the children met the criteria of internet addiction, but also that the degree of internet addiction had significant positive correlations with ADHD symptoms (both in inattention and hyperactivity–impulsivity domains). Two studies among middle and high school students showed a correlation between smartphone addiction and ADHD (especially when using social network service and music/videos)6, and that ADHD patients are more prone to smartphone addiction7. And researchers who investigated the effects on young adolescents8 found that higher frequency of digital media use (especially smartphones) increases the risk of developing ADHD symptoms by about 10 % within 2 years.

What about adult ADHD and excessive screen time?

Unfortunately, the bigger part of research focuses on children and teenagers, and findings about adult ADHD are more rare. But a very recent one9 on 273 British participants between 18 and 70 suggests that ADHD symptoms predict problematic cell phone use. And a study10 among undergraduate students at the University of Columbia revealed that frequent smartphone interruptions made people less attentive and more hyperactive – independent from an ADHD diagnosis.

Apart from ADHD focused research, excessive smartphone use has been associated with a number of negative effects on adults such as social phobia, depression, anxiety and daytime dysfunction11.

Conclusion: Screen time is associated with, but doesn’t necessarily lead to ADHD

To wrap up, most research suggests a correlation between ADHD and higher screen time, but this doesn’t prove a causative relationship. This means that high screen time doesn’t evidentially result in an ADHD disorder or vice versa.

It might be the other way round: ADHD could cause increased screen time. And this assumption seems logical: It’s well conceivable that people and especially children with ADHD feel more attracted to screens since they catch their attention, and that they are more prone to developing a smartphone or internet addiction.

However, some studies indeed suggest that digital media use increases the risk to trigger or amplify ADHD symptoms. And it’s not only research which points in this direction.

Even though research doesn’t confirm a causative connection, people with ADHD seem to see limiting screen time as an effective way to fight their symptoms.

Here are some interesting comments from a Reddit ADHD community thread:

Almost as soon as I don't spend so much time on the internet, my capabilities slowly come back to me.

[...] the more screen time the worse my adhd symptoms are so reducing it does help a lot even without other treatment.

All my adhd symptoms disappear after a couple of weeks of no artificial stimulation. It’s obviously not very sustainable though and I’ve never managed to moderate it after detoxing but i suspect they disappear permanently if i somehow manage to control it.

Some users who engaged in the discussion pointed out that it’s not necessarily ADHD as a diagnosed neurodevelopmental disorder which is affected by screen time, but rather “internet addiction”:

I don't think I have adhd, I'm just addicted to social media which might have similar effects [as] adhd.

Internet addiction can cause ADHD like symptoms. The only way to know for sure if you have ADHD or are just addicted to the internet is to stop for a while and see if you feel better or the same.

Obviously, limiting screen time CAN help ADHD patients (and also those without a ADHD diagnosis who are struggling with a short attention span).

It’s definitely worth trying what digital detox does to you. If you want to find out, here are some ways to limit your screen time.

There are numerous strategies to keep oneself from the smartphone and other screens. Here’s my selection of the most effective ones:

Leave your phone at home

Give your mind a break and leave your phone behind from time to time, for example when going for a walk. You don’t need access to social media and other distracting apps all the time.

Well, that’s a real nobrainer: You can’t spend time in apps that don’t exist on your phone. Even if it might be hard to imagine life without them, it is possible and doesn’t even make for a huge sacrifice once we get used to the new situation.

If abandoning your favorite social media apps completely seems too hard, you can at least hide them so you don’t get reminded of them all the time. Most importantly, abandon social media from your home screen. This way you make sure to use them only intentionally and not on a whim, just like “Oh, there’s Instagram … haven’t checked what’s new for a while.”

Turn your screen to grayscale

Sounds like no fun? Absolutely, and that’s the idea behind it.
Flashy colors grab our attention and keep it interesting to scroll through feeds, look at pictures and watch videos for hours. But with everything in black and white and gray, the internet is way less fun. Try it - I bet your screen time will drop dramatically.

Every notification can result in the urge of looking at your phone and get lost in your messenger or social media apps. So why not avoid the hazard by turning off notifications on your smartphone or smartwatch completely ? Or, if it’s necessary for you to keep on track with specific updates, go over your apps and select carefully which of them should be allowed to send push notifications.

Reply from notifications, instead of opening the app to reply

This trick allows you to quickly reply to notifications without opening the app and becoming distracted by other app features. Just pull down or long press a notification to show the reply sheet and answer directly from there. This works for messaging apps as well as other apps like Instagram.

Be aware that the content you post on social media is part of the reason your friends spend more time on social media. Instead of posting, write them a letter, call them, or at least send them a personal message. Posting less also gives you fewer reasons to open the apps, check reactions, comments, and other notifications related to your postings.

Screens are very crucial parts of our lives – so crucial that we don’t even notice it anymore. Therefore, to reduce your screen time, it’s necessary to look closely at our everyday lives, develop awareness and try to eliminate screens where possible:

It might seem hard in the beginning, but every little step is a success and will lead to a more independent and happy life!

I found the Holy Grail. My screen time dropped an average 44% last week.

This person was talking about my app one sec, which makes users wait for social media or other addictive internet content to open. As a consequence, those (destructive) short-term dopamine hits become less available – and the brain loses interest.

Before stumbling upon this post, I had no idea that one sec could be beneficial for people with an ADHD diagnosis. But it obviously was!

Twitter, IG and TikTok can't provide instant gratification anymore. Now I have to wait and think why do I want to go into social media. Is it because I'm bored? Is it for work? Am I using my job as a social media manager as an excuse for logging into social media? 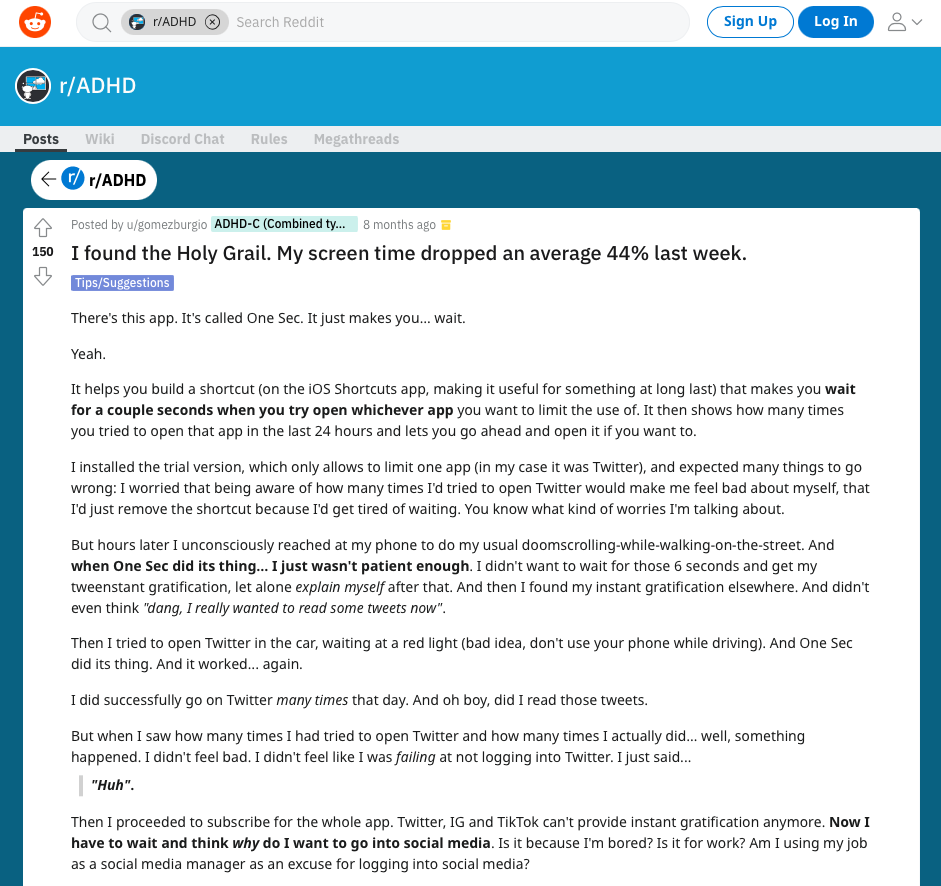 You don’t have to subscribe and pay to use one sec. Go ahead and test if it actually helps you. With the free version, you can block one app or website.

This is how one sec works

one sec is an app for iOS and Android which, once configured, makes you wait for your favorite distractive apps to open. This way, your social media usage can be cut in half – this has been confirmed by a study with Max Planck Institute.

Realize and question every single attempt to use social media.

one sec works fully automated and is triggered by every attempt to open the app or website of your choice. You will be forced to take a deep breath and then decide: Do you really want to spend time there? Or was it just an impulse out of boredom or stress?

Block social media apps that distract you the most

You can block websites as well

No matter if it’s a news site, your favorite forum or adult content – keep yourself from wasting time on any website. It’s the same effective technique and configuration only takes a few minutes.

1.  Symptoms and Diagnosis of ADHD

4. Screen-time is associated with inattention problems in preschoolers: Results from the CHILD birth cohort study

8. Association of Digital Media Use With Subsequent Symptoms of Attention-Deficit/Hyperactivity Disorder Among Adolescents